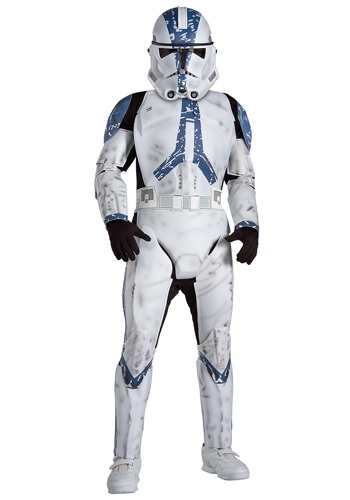 Your kid always runs around the house, defending it from invaders in the name of peace and justice. And he’s constantly going on about trying to defeat the Trade Federation and their robot army by following the orders of General Kenobi and the other Jedi. You might just have a little Mandalorian warrior in your midst. Obviously, he’s the best of the best, modeled from the famous Jango Fett himself, and trained to be the perfect defender of the Republic….or at least the living room. When he finally has this Deluxe Kids Clone Trooper EP3 Costume this rubber armor covered jumpsuit will allow him to defend your home with ease, protecting you from the robot armies that invaded Naboo not too long ago. Who knows, you might even see him dispatched off to Kashyyk — or his friend’s house — to defend their backyard from invasion. We hear Master Yoda will be there in person to direct the battle.With this deluxe jumpsuit with EVA molded armor, your little trooper feels protected against laser fire and confident enough to hurdle over the sofa to fulfill the objective. The whole look is complete and includes a two-piece PVC mask and belt, making him intimidating to anyone who dares to question the authority of the Republic. The only suggestion we have is to be on the lookout for that pesky Order 66; we don’t want to have to worry too much about the destruction of the Jedi Order or the rise of the Empire on your block.