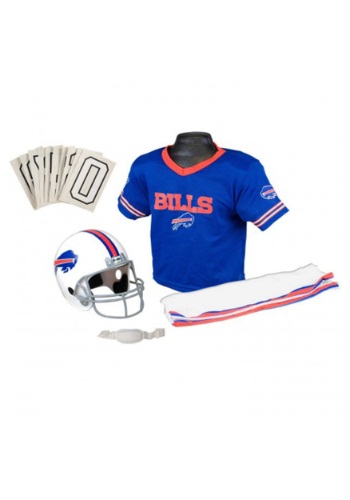 The Buffalo Bills uniform has an interesting origin. For their first two seasons the team colors were Honolulu blue, silver, and white. These were, perhaps not so coincidentally, the same colors as the Detroit Lions at the time. Their original owner Ralph Wilson had been a minority owner of the Lions, so it’s up to debate whether the Bills uniforms were inspired by Wilson’s previous team or straight up hand-me-downs from it.By 1962, however, the Bills had settled on what would more or less become their permanent red, white, and blue color scheme — always a good choice by American standards. Sure, there were those brief two decades where they switched to red helmets (this was so Joe Ferguson could more easily distinguish his receivers from the defensive backs of the Patriots, Dolphins, and Colts, all teams that all wore white helmets then too), but the iconic Bills uniform is clearly here to stay.Now your rising star can pay tribute to the only team that truly plays football in The Empire State. Our Buffalo Bills Uniform comes with a high quality jersey that they’ll want to wear year-round. It comes with iron-on numbers so they can put their number or their favorite player’s on the back. And with the helmet and pants they’ll, have the Bills look covered. Trust us, these are the only Bills you’ll actually want to get in the mail!