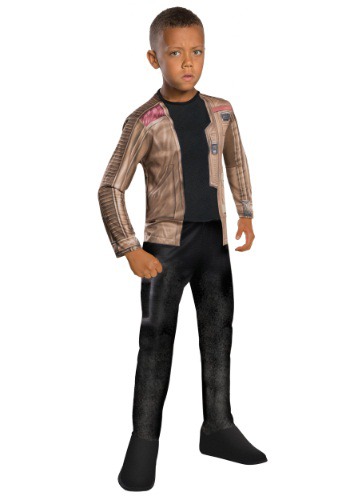 Your kid’s ready to finally leave behind the evil galactic First Order and cast aside his life as a stormtrooper. Because he’s one of the good guys, and he’s tired of doing the dirty work of the Dark Side. But he’s gotta have the right duds, or else he’ll be the biggest moving target on the planet Jakku! That’s why he shouldn’t leave the Star Destroyer without this Child Classic Star Wars The Force Awakens Finn Costume! It perfectly captures the look of the former stormtrooper turned hero, Finn, and is all your need kid needs to join the Resistance!Because outrunning the evil galactic forces is about being quick and thinking on your feet, this officially licensed suit is easy to wear and simple to get on. It’s a convenient one-piece, so your little hero won’t have to worry about keeping track of multiple costume pieces as he fights his foes throughout the night. It also comes with shoe covers to complete that futuristic look (or, actually, “retro look” if you think about it, since we’re talking about an adventure that takes place “a long time ago, in a galaxy far, far away”).Just make sure he doesn’t jump to hyperspace without the proper accessories! The Child Classic Star Wars The Force Awakens Finn Costume will do the job of making him look like his favorite hero, but it never hurts to be fully prepared when taking on the First Order. So be sure and have a look at our wide selection of blasters, lightsabers and other Star Wars gadgets!